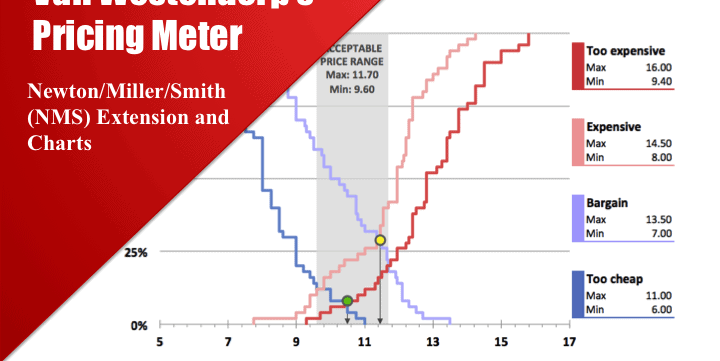 Introduced in 1976, this method has now become one of the most popular approaches to perform pricing analysis.

When a sufficient sample of responses is collected, the data is analyzed and plotted as cumulative frequencies. Two of the four cumulative frequencies (usually Cheap and Reasonable) are plotted inversely. The idea is to find the intersections of all plots, after which these intersections are (traditionally) interpreted in this way:
– The price level at which the number of respondents thinking it is Reasonable equals the number of respondents thinking it is High is considered the Indifference Price Point (IPP).
– Intersection of Reasonable and Too High – the Point of Marginal Expensiveness (PME).
– Intersection of Too Low and High – the Point of Marginal Cheapness (PMC)
– Intersection of Too Low and Too High – the Optimal Price Point (OPP)

The range between the Point of Marginal Expensiveness (PME) and the Point of Marginal Cheapness (PMC) is the acceptable price range.
These techniques give indications on price levels, but they say nothing of volumes. Under one of the extensions to this method (Newton/Miller/Smith (NMS) Extension), the respondents are also asked how likely they are to purchase this product at a Reasonable and High price, as they define them. Usually, they measure this on a five-point scale (from 1 point (unlikely) to 5 points (very likely)). These answers are converted into mathematical probabilities and interpreted statistically to build demand figures and revenue maximization points.

The attached file demonstrates how to perform this analysis and to draw the charts. It is accompanied by a guide explaining the method and proving details of calculations, formulas, and charts. Leveraged Buy Out (LBO) Model presents the business case of the purchase of a company by using a hig... Read more

The Hotel Investment Financial Model provides a framework to forecast the expected cash flows for a ... Read more The SaaS financial model template offers a framework in preparing a 5 to 10-year financial plan for ... Read more