This is a financial model geared toward planning out expected revenues if you have a smaller client base that makes up the majority of your sales. You will enter the contract details on the main data entry tab. One of the pieces of data you enter is the probability that the client renews with you.

Based on the contract term in months and the probability you assign a given contract, the model will run scenarios and test if the contract renews at the end of each term (your terms can be any number of months from 1 to 60).

The ‘rand’ function is used in order to do the test and is base don whatever % is entered. Holding all else equal, a contract with a 50% chance will renew less than a contract with a 75% chance. This gets interesting when you start plugging in real contract term lengths, revenues, and probabilities of your situation.

You can see that it fits ideally with a situation where you have a few Enterprise clients (<20) and they all have various terms / revenues. It could be the case that a given client represents many thousands of users but if they are all under the same contract, you can fit them under that one contract cohort to run the scenario tests.

I gave a place to enter test results with different conditions and at the end of the day you basically get an expected range of 5 year revenues based on all your data entered about the contract.

The formulas will update anytime anything is changed in the excel sheet as per how the ‘rand’ function operates in excel. You will also have access to the google sheet version of this model, which will be a link in the excel sheet once purchased. 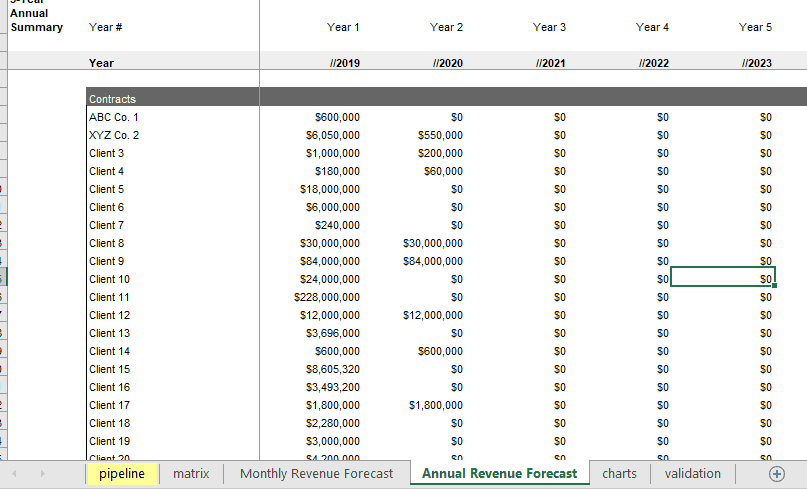 Leveraged Buy Out (LBO) Model presents the business case of the purchase of a company by using a hig... Read more

The Mergers & Acquisition (M&A) Model provides a projection for a company looking to potenti... Read more